Why Christians Get Sick

This woman was a living the Christian life until she discovered information that will change her life forever!

The Law Was And Is Unreachable…

I reply to a comment that was made under one of my videos from my “Yeshua Said Series”
The episode this person was commenting on can be found at this link:

Please see that video when you get a chance.

Here is the comment he left me about that video that I replied to.

I think you have a miss understanding concerning what most churches believe or teach concerning the law or the Torah. It is our belief that the law was and is unreachable and that is why sacrifices for sin offerings had to constantly be made during the time of the law or Torah. However when Christ Yeshua layed down his life as a living sacrifice this for filled the law. He was and is the last sacrifice needed for the forgiveness of sin. We believe that once a siner accepts Christ, Yeshua in their hearts they become one or apart of him therefore you don’t have to try (key word try) to follow the law because the word which is Christ now lives in you teaching you, guiding you, and convicting you when you deviate from His will. So as you can see we no longer live under the law (which is on the outside) but through God’s grace it now lives in us. Because God’s word lives in us and is apart of use we automatically seek to do his will. I’m not saying that we are always successful

but we repent by asking God to forgive us in the name of His son Christ Jesus-Yeshua and we press forward to be obedient to his will. Through the law we could only be set free or forgiven for our sinful error by making a sacrificial sin offering. God no longer requires this from us because we are living under his grace. This in no way means we can just go about doing what ever we want! No we seek to please our Father in heaven through the prompting of his Holy Spirit. I hope this has cleared up any misconceptions. PS: I like your term renewed.

Is Ebola The First Plague

Could Ebola be the first plague of the book of Revelation?

We read in the Book of Revelation:

1 And I heard a great voice from the Temple, that said to the seven angels, Go and pour
the seven bowls of the wrath of Eloah upon the earth.
2 And the first went and poured his bowl on the earth: and an evil and painful boil
came on the men who had the mark of the beast, and those who were worshipping his
image.
(Rev. 16:1-2)

Can I convert to messianic Judaism and be 100 percent Jewish

I answer 2 questions from a viewer:
1. What’s his true name of Messiah and how do you spell it?
2. Can I convert to messianic Judaism and become 100 % Jewish?

Whose Commands Are They? Moses, Yahweh or Yeshua?

Is it Law or Grace? If it is Law, whose Law is it?

God Loves Everyone, No Matter How They Live. Really?

After my friend sent me a text about this I had to make a video reply. 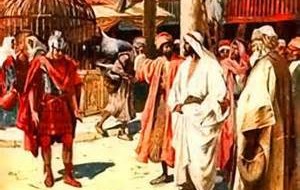 This is the 24 part of the Yeshua said series. In this video we talk about what Yehsua said to the about healing and faith.