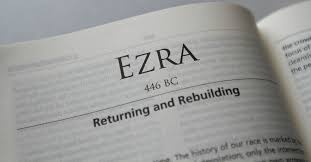 4 The enemies of Judah and Benjamin heard that the exiles were rebuilding a Temple to the Lord, the God of Israel. 2 So they approached Zerubbabel and the other leaders and said, “Let us build with you, for we worship your God just as you do. We have sacrificed to him ever since King Esarhaddon of Assyria brought us here.”

3 But Zerubbabel, Jeshua, and the other leaders of Israel replied, “You may have no part in this work. We alone will build the Temple for the Lord, the God of Israel, just as King Cyrus of Persia commanded us.”

4 Then the local residents tried to discourage and frighten the people of Judah to keep them from their work. 5 They bribed agents to work against them and to frustrate their plans. This went on during the entire reign of King Cyrus of Persia and lasted until King Darius of Persia took the throne.[a]

Later Opposition under Xerxes and Artaxerxes

6 Years later when Xerxes[b] began his reign, the enemies of Judah wrote a letter of accusation against the people of Judah and Jerusalem.

7 Even later, during the reign of King Artaxerxes of Persia,[c] the enemies of Judah, led by Bishlam, Mithredath, and Tabeel, sent a letter to Artaxerxes in the Aramaic language, and it was translated for the king.

8 [d]Rehum the governor and Shimshai the court secretary wrote the letter, telling King Artaxerxes about the situation in Jerusalem. 9 They greeted the king for all their colleagues—the judges and local leaders, the people of Tarpel, the Persians, the Babylonians, and the people of Erech and Susa (that is, Elam). 10 They also sent greetings from the rest of the people whom the great and noble Ashurbanipal[e] had deported and relocated in Samaria and throughout the neighboring lands of the province west of the Euphrates River.[f] 11 This is a copy of their letter:

“To King Artaxerxes, from your loyal subjects in the province west of the Euphrates River.

12 “The king should know that the Jews who came here to Jerusalem from Babylon are rebuilding this rebellious and evil city. They have already laid the foundation and will soon finish its walls. 13 And the king should know that if this city is rebuilt and its walls are completed, it will be much to your disadvantage, for the Jews will then refuse to pay their tribute, customs, and tolls to you.

14 “Since we are your loyal subjects[g] and do not want to see the king dishonored in this way, we have sent the king this information. 15 We suggest that a search be made in your ancestors’ records, where you will discover what a rebellious city this has been in the past. In fact, it was destroyed because of its long and troublesome history of revolt against the kings and countries who controlled it. 16 We declare to the king that if this city is rebuilt and its walls are completed, the province west of the Euphrates River will be lost to you.”

17 Then King Artaxerxes sent this reply:

“To Rehum the governor, Shimshai the court secretary, and their colleagues living in Samaria and throughout the province west of the Euphrates River. Greetings.

18 “The letter you sent has been translated and read to me. 19 I ordered a search of the records and have found that Jerusalem has indeed been a hotbed of insurrection against many kings. In fact, rebellion and revolt are normal there! 20 Powerful kings have ruled over Jerusalem and the entire province west of the Euphrates River, receiving tribute, customs, and tolls. 21 Therefore, issue orders to have these men stop their work. That city must not be rebuilt except at my express command. 22 Be diligent, and don’t neglect this matter, for we must not permit the situation to harm the king’s interests.”

23 When this letter from King Artaxerxes was read to Rehum, Shimshai, and their colleagues, they hurried to Jerusalem. Then, with a show of strength, they forced the Jews to stop building.

24 So the work on the Temple of God in Jerusalem had stopped, and it remained at a standstill until the second year of the reign of King Darius of Persia.[h]

Exiles Who Returned with Zerubbabel

2 Here is the list of the Jewish exiles of the provinces who returned from their captivity. King Nebuchadnezzar had deported them to Babylon, but now they returned to Jerusalem and the other towns in Judah where they originally lived. 2 Their leaders were Zerubbabel, Jeshua, Nehemiah, Seraiah, Reelaiah, Mordecai, Bilshan, Mispar, Bigvai, Rehum, and Baanah.

This is the number of the men of Israel who returned from exile:

36 These are the priests who returned from exile:

40 These are the Levites who returned from exile:

43 The descendants of the following Temple servants returned from exile:

55 The descendants of these servants of King Solomon returned from exile:

58 In all, the Temple servants and the descendants of Solomon’s servants numbered 392.

59 Another group returned at this time from the towns of Tel-melah, Tel-harsha, Kerub, Addan, and Immer. However, they could not prove that they or their families were descendants of Israel. 60 This group included the families of Delaiah, Tobiah, and Nekoda—a total of 652 people.

61 Three families of priests—Hobaiah, Hakkoz, and Barzillai—also returned. (This Barzillai had married a woman who was a descendant of Barzillai of Gilead, and he had taken her family name.) 62 They searched for their names in the genealogical records, but they were not found, so they were disqualified from serving as priests. 63 The governor told them not to eat the priests’ share of food from the sacrifices until a priest could consult the Lord about the matter by using the Urim and Thummim—the sacred lots.

68 When they arrived at the Temple of the Lord in Jerusalem, some of the family leaders made voluntary offerings toward the rebuilding of God’s Temple on its original site, 69 and each leader gave as much as he could. The total of their gifts came to 61,000 gold coins,[e] 6,250 pounds[f] of silver, and 100 robes for the priests.

70 So the priests, the Levites, the singers, the gatekeepers, the Temple servants, and some of the common people settled in villages near Jerusalem. The rest of the people returned to their own towns throughout Israel.

Cyrus Allows the Exiles to Return

1 In the first year of King Cyrus of Persia,[a] the Lord fulfilled the prophecy he had given through Jeremiah.[b] He stirred the heart of Cyrus to put this proclamation in writing and to send it throughout his kingdom:

2 “This is what King Cyrus of Persia says:

“The Lord, the God of heaven, has given me all the kingdoms of the earth. He has appointed me to build him a Temple at Jerusalem, which is in Judah. 3 Any of you who are his people may go to Jerusalem in Judah to rebuild this Temple of the Lord, the God of Israel, who lives in Jerusalem. And may your God be with you! 4 Wherever this Jewish remnant is found, let their neighbors contribute toward their expenses by giving them silver and gold, supplies for the journey, and livestock, as well as a voluntary offering for the Temple of God in Jerusalem.”

5 Then God stirred the hearts of the priests and Levites and the leaders of the tribes of Judah and Benjamin to go to Jerusalem to rebuild the Temple of the Lord. 6 And all their neighbors assisted by giving them articles of silver and gold, supplies for the journey, and livestock. They gave them many valuable gifts in addition to all the voluntary offerings.

7 King Cyrus himself brought out the articles that King Nebuchadnezzar had taken from the Lord’s Temple in Jerusalem and had placed in the temple of his own gods. 8 Cyrus directed Mithredath, the treasurer of Persia, to count these items and present them to Sheshbazzar, the leader of the exiles returning to Judah.[c] 9 This is a list of the items that were returned:

11 In all, there were 5,400 articles of gold and silver. Sheshbazzar brought all of these along when the exiles went from Babylon to Jerusalem.

Introduction to The Book of Ezra

Introduction to The Book of Ezra