Father, when a word I give helps another, I need that.

When I dream of how Your blessings are coming and someone confirms it, I need that.

When I pray to You and sense Your strong presence, I need that.

When friends and loved ones pray for me, I need that.

When my children can still find joy in You even while I suffer, I need that.

When my children desire to stay intimate with me, I need that.

When I pray and You answer, I need that.

When I ask You to show me the way and You do, I need that.

The faith to trust what I cannot see, I need that.

Daily hope, I need that.

Whispers from Your Spirit, I need that.

Words of affirmation, I need that.

Favor, I need that.

Forgiveness, I need that.

Wisdom and knowledge, I need that.

Humility and meekness, I need that.

The ability to sing no matter the circumstance, I need that.

The heart to continually worship, I need that.

Courage, I need that.

Strength to stand before my Goliath, I need that.

Peace and prosperity, I need that.

Grace and peace be multiplied to you in the knowledge of the Almighty and the Master Yahshua Messiah, as His Spiritual power has given to us all things that pertain to life and being conformed to His Mighty image, through the knowledge of Him who called us by glory and virtue, by which have been given to us exceedingly great and precious promises, that through these you may be partakers of the spiritual nature, having escaped the corruption that is in the world through lust. (2 Peter 1:2-4) 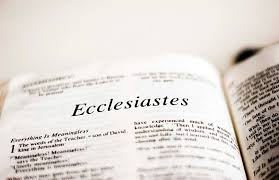 1 There is another serious tragedy I have seen under the sun, and it weighs heavily on humanity. 2 God gives some people great wealth and honor and everything they could ever want, but then he doesn’t give them the chance to enjoy these things. They die, and someone else, even a stranger, ends up enjoying their wealth! This is meaningless—a sickening tragedy.

3 A man might have a hundred children and live to be very old. But if he finds no satisfaction in life and doesn’t even get a decent burial, it would have been better for him to be born dead. 4 His birth would have been meaningless, and he would have ended in darkness. He wouldn’t even have had a name, 5 and he would never have seen the sun or known of its existence. Yet he would have had more peace than in growing up to be an unhappy man. 6 He might live a thousand years twice over but still not find contentment. And since he must die like everyone else—well, what’s the use?

7 All people spend their lives scratching for food, but they never seem to have enough. 8 So are wise people really better off than fools? Do poor people gain anything by being wise and knowing how to act in front of others?

9 Enjoy what you have rather than desiring what you don’t have. Just dreaming about nice things is meaningless—like chasing the wind.

10 Everything has already been decided. It was known long ago what each person would be. So there’s no use arguing with God about your destiny.

11 The more words you speak, the less they mean. So what good are they?

12 In the few days of our meaningless lives, who knows how our days can best be spent? Our lives are like a shadow. Who can tell what will happen on this earth after we are gone?

1 Then Bildad the Shuhite replied to Job:

2 “How long will you go on like this?
You sound like a blustering wind.
3 Does God twist justice?
Does the Almighty twist what is right?
4 Your children must have sinned against him,
so their punishment was well deserved.
5 But if you pray to God
and seek the favor of the Almighty,
6 and if you are pure and live with integrity,
he will surely rise up and restore your happy home.
7 And though you started with little,
you will end with much.

8 “Just ask the previous generation.
Pay attention to the experience of our ancestors.
9 For we were born but yesterday and know nothing.
Our days on earth are as fleeting as a shadow.
10 But those who came before us will teach you.
They will teach you the wisdom of old.

11 “Can papyrus reeds grow tall without a marsh?
Can marsh grass flourish without water?
12 While they are still flowering, not ready to be cut,
they begin to wither more quickly than grass.
13 The same happens to all who forget God.
The hopes of the godless evaporate.
14 Their confidence hangs by a thread.
They are leaning on a spider’s web.
15 They cling to their home for security, but it won’t last.
They try to hold it tight, but it will not endure.
16 The godless seem like a lush plant growing in the sunshine,
its branches spreading across the garden.
17 Its roots grow down through a pile of stones;
it takes hold on a bed of rocks.
18 But when it is uprooted,
it’s as though it never existed!
19 That’s the end of its life,
and others spring up from the earth to replace it.

20 “But look, God will not reject a person of integrity,
nor will he lend a hand to the wicked.
21 He will once again fill your mouth with laughter
and your lips with shouts of joy.
22 Those who hate you will be clothed with shame,
and the home of the wicked will be destroyed.”

He replied, “I am going to measure Jerusalem, to see how wide and how long it is.”

3 Then the angel who was with me went to meet a second angel who was coming toward him. 4 The other angel said, “Hurry, and say to that young man, ‘Jerusalem will someday be so full of people and livestock that there won’t be room enough for everyone! Many will live outside the city walls. 5 Then I, myself, will be a protective wall of fire around Jerusalem, says the Lord. And I will be the glory inside the city!’”

The Exiles Are Called Home

6 The Lord says, “Come away! Flee from Babylon in the land of the north, for I have scattered you to the four winds. 7 Come away, people of Zion, you who are exiled in Babylon!”

10 The Lord says, “Shout and rejoice, O beautiful Jerusalem,[d] for I am coming to live among you. 11 Many nations will join themselves to the Lord on that day, and they, too, will be my people. I will live among you, and you will know that the Lordof Heaven’s Armies sent me to you. 12 The land of Judah will be the Lord’s special possession in the holy land, and he will once again choose Jerusalem to be his own city. 13 Be silent before the Lord, all humanity, for he is springing into action from his holy dwelling.”

Jonah’s Anger at the Lord’s Mercy

1 This change of plans greatly upset Jonah, and he became very angry. 2 So he complained to the Lord about it: “Didn’t I say before I left home that you would do this, Lord? That is why I ran away to Tarshish! I knew that you are a merciful and compassionate God, slow to get angry and filled with unfailing love. You are eager to turn back from destroying people. 3 Just kill me now, Lord! I’d rather be dead than alive if what I predicted will not happen.”

4 The Lord replied, “Is it right for you to be angry about this?”

5 Then Jonah went out to the east side of the city and made a shelter to sit under as he waited to see what would happen to the city. 6 And the Lord God arranged for a leafy plant to grow there, and soon it spread its broad leaves over Jonah’s head, shading him from the sun. This eased his discomfort, and Jonah was very grateful for the plant.

7 But God also arranged for a worm! The next morning at dawn the worm ate through the stem of the plant so that it withered away. 8 And as the sun grew hot, God arranged for a scorching east wind to blow on Jonah. The sun beat down on his head until he grew faint and wished to die. “Death is certainly better than living like this!” he exclaimed.

9 Then God said to Jonah, “Is it right for you to be angry because the plant died?”

10 Then the Lord said, “You feel sorry about the plant, though you did nothing to put it there. It came quickly and died quickly. 11 But Nineveh has more than 120,000 people living in spiritual darkness,[a] not to mention all the animals. Shouldn’t I feel sorry for such a great city?”

1 This is what the Lord says:

“The people of Moab have sinned again and again,[a]
and I will not let them go unpunished!
They desecrated the bones of Edom’s king,
burning them to ashes.
2 So I will send down fire on the land of Moab,
and all the fortresses in Kerioth will be destroyed.
The people will fall in the noise of battle,
as the warriors shout and the ram’s horn sounds.
3 And I will destroy their king
and slaughter all their princes,”
says the Lord.

God’s Judgment on Judah and Israel

4 This is what the Lord says:

“The people of Judah have sinned again and again,
and I will not let them go unpunished!
They have rejected the instruction of the Lord,
refusing to obey his decrees.
They have been led astray by the same lies
that deceived their ancestors.
5 So I will send down fire on Judah,
and all the fortresses of Jerusalem will be destroyed.”

6 This is what the Lord says:

“The people of Israel have sinned again and again,
and I will not let them go unpunished!
They sell honorable people for silver
and poor people for a pair of sandals.
7 They trample helpless people in the dust
and shove the oppressed out of the way.
Both father and son sleep with the same woman,
corrupting my holy name.
8 At their religious festivals,
they lounge in clothing their debtors put up as security.
In the house of their gods,[b]
they drink wine bought with unjust fines.

9 “But as my people watched,
I destroyed the Amorites,
though they were as tall as cedars
and as strong as oaks.
I destroyed the fruit on their branches
and dug out their roots.
10 It was I who rescued you from Egypt
and led you through the desert for forty years,
so you could possess the land of the Amorites.
11 I chose some of your sons to be prophets
and others to be Nazirites.
Can you deny this, my people of Israel?”
asks the Lord.
12 “But you caused the Nazirites to sin by making them drink wine,
and you commanded the prophets, ‘Shut up!’

13 “So I will make you groan
like a wagon loaded down with sheaves of grain.
14 Your fastest runners will not get away.
The strongest among you will become weak.
Even mighty warriors will be unable to save themselves.
15     The archers will not stand their ground.
The swiftest runners won’t be fast enough to escape.
Even those riding horses won’t be able to save themselves.
16 On that day the most courageous of your fighting men
will drop their weapons and run for their lives,”
says the Lord.