Colossians 2:16 Who is judging who?

In this verse who is really judging who?

Therefore no one is to act as your judge in regard to food or drink or in respect to a festival or a new moon or a Sabbath day–
-Colossians 2:16

This is the 23 rd part of the Yeshua said series. In this video we talk about what Yehsua said to the man with Leperosy

Mat 8:1 Large crowds followed Yeshua as he came down the mountainside.

Mat 8:2 Suddenly, a man with leprosy approached him and knelt before him. “Lord,” the man said, “if you are willing, you can heal me and make me clean.”

Mat 8:3 Yeshua reached out and touched him. “I am willing,” he said. “Be healed!” And instantly the leprosy disappeared.

Mat 8:4 Then Yeshua said to him, “Don’t tell anyone about this. Instead, go to the priest and let him examine you. Take along the offering required in the law of Moses for those who have been healed of leprosy.fn This will be a public testimony that you have been cleansed.”

What do you say to Christians who love to sin?

The message of the Scriptures

A slave and servant of Yeshua The Messiah 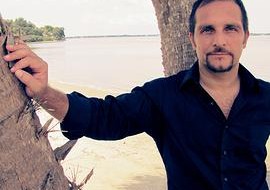 I’m excited to start this year off with this interview. Here is a brother who is on fire for Yahweh.

Carlos Perdomo is a messianic singer with a vision to bring  fellowship to the body of Messiah through worshiping and entering into the presence of our Creator.

by tlmadmin on October 03, 2013 in with 6 Comments
This is a question I get many times and answer it as directly as I can. Still some people do not seem to understand.
My friend and local radio host recently asked me in an interview if I try to keep all the commandments. After I told him I don’t because there are some commandments that I can’t keep, he didn’t seem to understand.
Please listen to this quick interview and tell me if you think I answered the question clearly or was my answer confusing.
http://torahlifeministries.org/portfolio-post/the-bible-commandments/
Share on Twitter
Share

In this Torah Portion we read about Moses being forbidden to enter the promised land, Moses urging Israel to obey the Torah, and the principles for Godly living. The ten commandments are given and spoken about.

This Woman Went Back To Keeping The Law.

http://www.torahlife.tv This Christian women discovered Hebrew Roots and returned to the real understanding of keeping the Law.
You can see her blog at http://myhalak.blogspot.com/